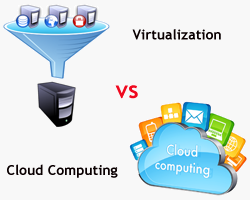 In this is blog i.e. Virtualization Vs Cloud computing, we will try to clear out all the elements that create confusion in users mind.

What is Virtualization Technology? 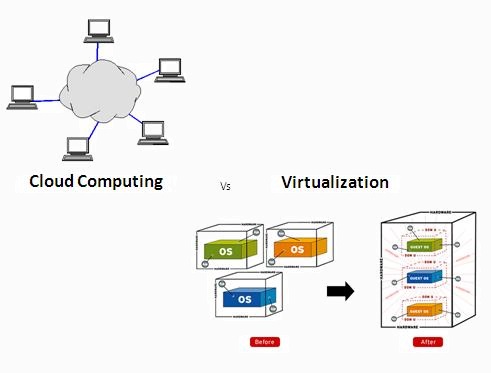 Software that divides physical infrastructures for the creation of several dedicated resources is virtualization. It is the basic technology that powers cloud computing. Virtualization software makes it feasible to run numerous operating systems and numerous applications on one server simultaneously. Moreover, it enables businesses to lessen the costs of IT while increasing the effectiveness, consumption, and elasticity of their existing computer hardware. The technology, which is behind virtualization is called virtual machine monitor (VMM), which is responsible for the separation of the computing environment and actual physical infrastructure. Virtualization makes workstations, storage, servers and other independent of physical hardware layer.

What is Cloud Computing?

Accessing programs or data over the internet instead of the computer’s hard drive is known as cloud computing. In addition, it is not about the hard drive. Whenever users save the data or run programs from the hard drive, it is known as local storage and computing. The whole thing becomes close to the users, which leads to the easy and fast access to data for that one or the other computers present on that network. Moreover, This technology is a service whose foundation is based on virtualization. In this, the collective computing assets, software or data are delivered on service per demand basis through the internet.

What is good for Business Purposes?

Virtualization and Cloud Computing are two technologies that are very famous nowadays. In their initial stages, they are only available to large-scale enterprises, but now they are available for small-scale enterprises as well. Both words often create confusion in the mind of users. Therefore, to resolve this confusion we have thoroughly discussed the difference between virtualization and cloud computing along with their respective benefits. We have learned that virtualization vs cloud computing both have their own benefits.